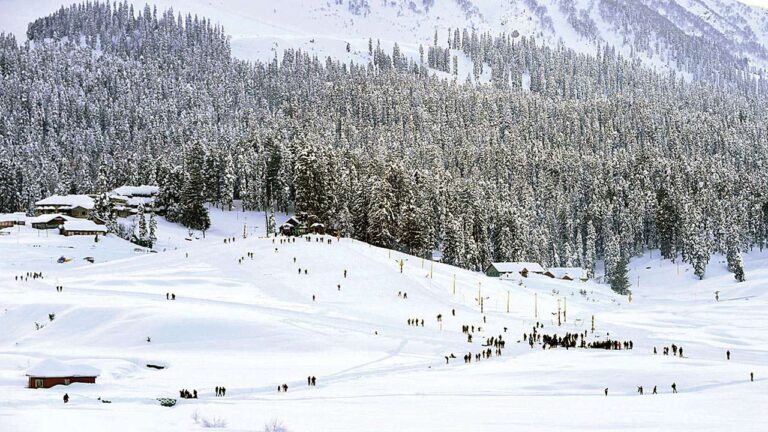 1. Leh Ladakh – Leh Ladakh is called the Land of the High Passes. Currently, it is part of union territory in the Kashmir region of India. It is one of the most beautiful places in India. Every year many international Tourists visit this place. The best season to visit Leh Ladakh is April to June. It is famous for its beautiful hills and stunning scenic locales, Buddhist temples, and pristine environment. The Famous food of this region is Sku and Thukpa (made of wheat flour), Pava (made of sattu), and khambir (local bread).

2. Gulmarg – Gulmarg is Popular as Hill Station and Skiing Destination. it is part of Kashmir which is called mini Switzerland in India. It is the beautiful crown of India. The Famous Local food Gulmarg Dum Aloo and Chaman. The best season to visit Gulmarg is March to June.

3. Nainital – Nainital is a small town in Uttarakhand’s Kumaon range, Nainital is one of the most famous destinations places for newly married couples. It is also called the Hill Station of Lake. its small markets are always busy with its Tourists which is very beautiful. The best season to visit Nainital is March to June. The Special food of Nainital is Rice or roti which is usually served with different types of chutneys.

4. Mussoorie – Mussoorie is called the Queen of the Hill Stations. It is one of the beautiful hill stations of a small state (Uttarakhand) in India. It is Popular for its Hill Station, Restaurants, Mall Road, Shopping, Weekend Getaway, Honeymoon Destination. The best season to visit Mussoorie is April to June. In Mussoorie you can experience the snow from the end of December to mid-February. The Special food of Mussoorie is Aloo ke Gutke.

5. Manali – It is also called Valley of the Gods. It is one of the highest altitude Himalayan towns in the northern Indian beautiful state of Himachal Pradesh. It is famous as a Honeymoon destination place in India. Manali is known for its unlimited adventure opportunities & the snow-laden Solang Valley, Hadimba Temple, and its delightful culinary scene. The best season to visit Manali is December end to January. The famous street food of Manali is Mittha.

6. Darjeeling – Darjeeling is a beautiful town in India’s West Bengal state. It is called The Hill Station of Tea Plantations. This is placed in the Himalayan foothills. It is famous for scenic beauty, ancient forests, quaint houses, friendly people, and the mountain panorama that it provides. The best time to visit April to June. The Special food of Darjeeling is Momos.

7. Shillong – This is the hill town of India’s Small & Beautiful state Meghalaya. Shillong is called the Scotland of the East. This is Famous for its heavy rainfall, caves, tallest waterfalls, beautiful landscapes, and amazing people and their culture. Peak Season to visit Shillong is from March to June. Momos are one of the famous street food of Shillong.

8. Gangtok – Gangtok is the Largest Town and Hill Station in Sikkim. It is Famous for its scenic beauty and striking views of Mount Kanchenjunga, the third-highest peak in the world. The best time to visit September and October and March to June is ideal. Thukpa is one of the most Famous Street foods in Gangtok amongst tourists.

9. Chamba – Chamba is the Picture Perfect Hill Station of the State Himachal Pradesh. It is famous for the land of Kailash Mountain, Lord Shiva, and for its untouched natural beauty. The best season to visit Chamba is all through the year. The most famous food in Chamba Himachal Pradesh is Madhra.

10. Tawang – Tawang is the Hill Station Where the Sixth Dalai Lama & Tsangyang Gyatso was born. Tawang is famous of its 400-year-old monastery and its beautiful hill & valley. Summers season and the onset of monsoon season is the best time to visit Tawang. Momos and Thukpa are the most famous food in Tawang.